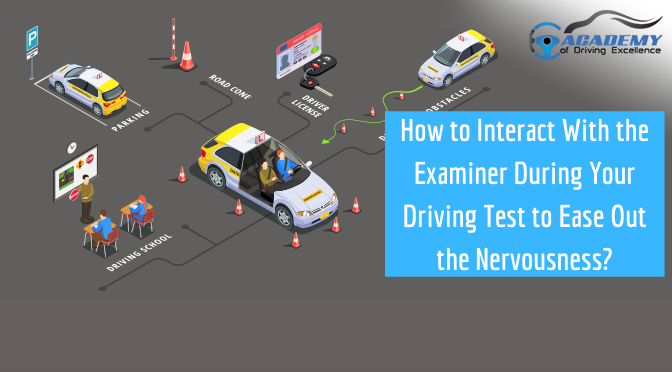 Driving school
How to Interact With the Examiner During Your Driving Test to Ease Out the Nervousness?
July 26, 2020 admin Leave a comment

We have found that the trainees, even after fairing pretty well throughout the training sessions falter at the last hurdle – cracking the driving test. There are two reasons behind it. One, they get unnecessarily nervous during the test, and two, they get overconfident. While dealing with overconfidence is a different proposition, nervousness happens due to two other reasons – lack of confidence and assuming the examiner to be an out-of-this-world species. That is the reason every reputed driving school in Carlton like elsewhere comes up with certain suggestions that help their trainees to overcome their nervousness. We at Academy Of Driving Excellence do the same! Here on this page, we would discuss the best way of interacting with the examiner during the driving test.

Be Professional and Maintain a Balance While Interacting

Examiners are professionals who have their task cut out. Thus their main motto is to see how well trained and well prepared a trainee is, before obtaining the drivers licence. No examiner would like to see their trainees failing to crack the test. They remain cordial and helpful enough during tests while maintaining professionalism. Hence, unnecessary panic while interacting with the examiners is uncalled for. In fact, they would always look forward to interacting with the trainees cordially.

However, that does not mean you need to be over-enthusiast while interacting with the examiner. That is firstly unprofessional and it will distract you, taking your concentration off. Secondly, and most importantly, too much talkativeness while driving will be considered as a negative point. At the same time, being introvert, tense, and shy will do no good either. Therefore, the mentors, while imparting driving lessons in Carlton would advise our trainees to be attentive and interact with the examiners with confidence and prudency.

How Interacting Normally With Examiners Helps?

Interacting with the examiner during the driving test would help in two ways. On one hand, it will help the trainees to be at ease with the examiner, and on the other hand, it will put you in a real-life driving situation. It’s not that while driving, you will put yourself in a ‘no chat’ mode. In other words, you will have to maintain minimum and occasional conversational interaction with your passengers while driving. Thus, chatting at times with the examiner during the driving test in Carlton will help you get accustomed to the phenomenon of chatting while driving and still keeping intact your concentration on the road and the surroundings.

So What’s the Bottom Line?

Chat with the examiner if it helps to keep cool and calm your nerves, but ensure it does not distract you, so much so that the examiner has to tell you to concentrate more on the test. That’s a negative in the merit book.

If you need to keep mum and concentrate more on driving, you can do that either. The examiner will realize your compulsion and not consider it as a symbol of rudeness.

Listen Minutely to the Debriefing at the End of the Test

Even if you pass, you can still be found wanting in terms of skills on certain fronts. Take note of that so that you can make amends as quickly as possible.

Academy Of Driving Excellence will come up with all these details for its trainees so that they can put their best step forward on the day of the test. For further details, contact us at 0425749703 during our office hours.

Recent Posts
Categories
We are a proud member of ADTAV :