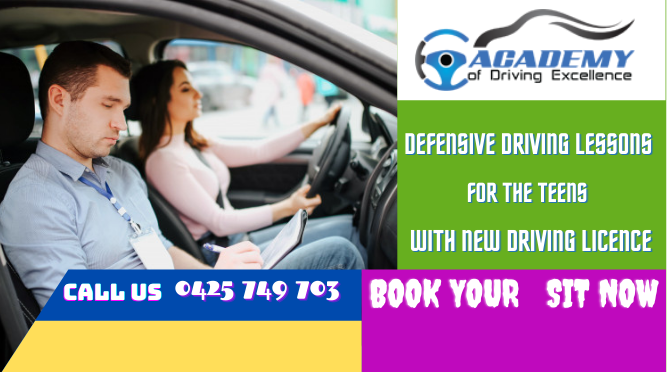 Defensive Driving has always been one of the most effective ways to stay safe at wheels. Hence, every driving school in Melbourne as anywhere else would always suggest their trainees vouch for defensive driving. It’s the same with us at Academy of Driving Excellence. Our instructors would always suggest defensive driving when they train up folks. In fact, the training curriculum that we follow to train people always encourages the same. Yet, at times, people, more so the teens forget these basics, and that invites trouble. Therefore, here we are, with a ready reckoner about defensive driving, which discusses it’s principles. If you are a young adult, adventurous in nature, vying to gain new things out of the exuberance of youth, and vying to get your licence anytime soon, we prefer you to go through this!

Here are the eight principles of super driving, which are all based on the philosophy of defensive driving.

Yes, follow the safety-first rule – always! Avoid the tendency of driving aggressively or inattentively, for heavens’ sake. A good proportion of mishaps that take place on the roads of Melbourne and elsewhere in Victoria happen due to this. Going by the statistics, out of 1,194 deaths that occurred on Australian roads in 2019, 45% of the fatal clashes took place in the speed zones of 100km/hr, which by no means, is something to be ignored. Thus, while driving, leave enough space between you and the car ahead. That’s what our instructors would suggest while imparting driving lessons in Melbourne. Make sure to lock doors and never ever forget your seatbelt. If you do, even if you are not thrown out of the car being knocked by another vehicle, it will invite high ticketing amount and demerit points.

You need to check the mirrors frequently and scan the conditions outside continuously. In fact, you need to keep a strict vigil on the conditions at least 30 to 40 seconds ahead. In short, you have to pay the fullest attention and keep your eyes moving. In case you encounter a vehicle that shows signs of aggressiveness, do not try to match or supersede it. Simply slow down and pull over, if needed to avoid it.

Do Not Look Up to Others:

Be considerate to the other drivers, but do not depend on them. In other words, do not depend that the others will move out of your way or allow you to merge from one lane to the other. Plan your moves assuming the worst-case scenario. While driving in bad road conditions or climate, increase your distance from the vehicles ahead to avoid any tussle.

Always have escape routes: While you keep your speed within limits, whenever you drive, the best way of averting any potential threat is to position your vehicle in such a way, so that you have the best opportunity to be seen by others. Also ensure that you have an alternate route ready, to avert commotion in case the road ahead is blocked.

Besides, you need to separate the risks and cut out the distractions so that you can put your entire attention on the road ahead and the surroundings. For further details and to enroll for proper driving courses in Melbourne, contact Academy of Driving Excellence at 0425749703 during our office hours.